In November 2009, Northside Bridge in Workington was destroyed by the flooding caused by excessive rainfall. Over 300mm was recorded in 24-hours causing the River Derwent to breach. The surge of water from the Lake District also flowed into Workington meaning that some areas were submerged by up to 8ft in areas (2.44m).

Northside Bridge was constructed in 1904 and was an integral part of the infrastructure of Workington. Once the bridge collapsed, motorists faced an 18-mile detour. This could take up to two-hours for a round trip during peak periods.

Cumbria County Council worked for several months to come up with a solution, with one council member stating that the timescale envisaged was “almost unheard of in a civil engineering project of this size”.

In April 2010, less than 6-months after the flooding, Cumbria County Council opened a temporary bridge. This bridge was to remain in place until Workington again had two permanent crossings across the river.

Janson Bridging UK Ltd. were selected as the temporary bridge supplier. The remit was that the bridge would have to take HGV traffic as well as everyday vehicles as this was a key artery for the residents of Workington.

A 67m Panel bridge was the solution from Janson Bridging that was built onsite in 72 days and opened 5-weeks ahead of schedule. Due to the loadings of the bridge, a QDR4H was required meaning 4 lines of panels, two-high. There was also a requirement for a segregated walkway either side to keep pedestrians safe from the moving traffic. The bridge weighed 350 tonnes and was funded by the UK Government as part of its Emergency Package for Cumbria. 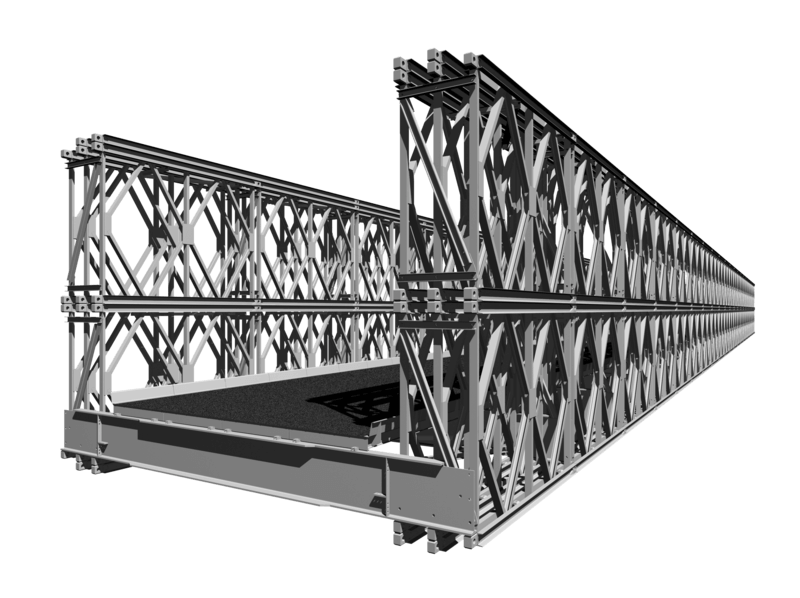